What is Letter Writing?

A letter is a composed message that can be manually written or imprinted on paper and writing a letter is an expertise or skill that is to be leaned or developed. It includes proper structuring of the letter, writing the key purpose precisely and maintaining a correct format of letter while curating it. Generally, there are two types of  letters i.e. formal and informal. A formal letter is composed or written for any official and business communication and informal letter are all those personal letters which are being used to communicate with friends and family.

'Letter writing' is an art. It is nowadays an essential part of life - personal as well as professional. It is one of the important arts of civilized life. It is an art that every educated man should develop. We have to write many letters in our day-to-day life. Hence, it is desirable to know what makes these letters attractive and impactful. The value of a good letter is great, both in business and in personal correspondence. A good letter never fails to impress. A badly written letter may even lead to misunderstanding.

A letter is a substitute for the conversation. It is nothing but speaking with a pen. It should, therefore, be as simple in form and natural in style as if the writer were actually speaking to the addressee.

The objective of a letter writer is to convey a message to the person at the receiving end, there being no personal contact. It is, therefore, natural that language should be simple, clear and concise.

The style of a letter should be adapted to the person and the subject concerned. To superiors, it should be respectful; to juniors, courteous to friends, familiar to relations, affectionate to children, simple and playful. On important subjects, it should be logical and impressive; lighter subjects, easy and flowing; tender and sympathetic for condolence lively and joyous for congratulations. In business letters, politeness and tact are very important while in personal letters, sincerity is the highest virtue.

It is, therefore, essential to learn not only the technique but also the art of writing letters through constant practice

Some Important Point to Focus In Letter Writing :

1. Write as you speak. Your letter should be in the nature of a conversation.

2. Adopt a familiar style for those who are intimate, but write in a formal

3. Use a suitable beginning before you start with the actual letter.

4. Write what you have to say-clearly, briefly and precisely.

5. Be courteous and tactful. Avoid offending.

6. Avoid boring remarks. Better do away with hackneyed phrases

7. Never fail to date your letter

8. A student should write in a simple and clear language. The style of a letter depends on the nature of  its Contents. Private letters should be in the conversational style: business letters, short, concise and to the point and official letters, formal and dignified.

9. Correct spellings are equally desirable even in the most familiar forms of correspondence. A letter should be legible, grammatically correct and rightly spelt.

10. Avoid bad punctuation which is often the cause of obscurity

There are generally two kinds of letters: 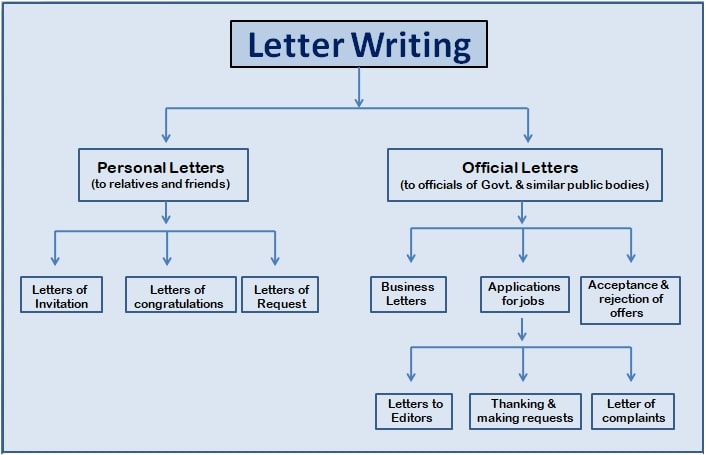 Formal letter writing is used to write letters to business houses, customers, government officials, school/college authorities, editors, colleagues, strangers and acquaintances. As the term itself indicates, a formal letter is written in a formal style i.e. its language and tone is formal, impersonal or objective but pleasant. Therefore, it precludes any informal expressions, greetings or contracted forms of words. The language is straight forward and to the point. Though at times a formal letter may be strongly worded, it is never rude or impolite.

Following are the few types of Formal Letters:

What is Informal Letter Writing?

Informal letter writing is used to write letters to relatives and friends. Since such letters are personal in nature. They should be written in a simple, clear, easy to understand, natural and lively style just as one talks to a friend/relative.

Following are the few types of Formal Letters:

Letter Writing Format and its Importance:

A sample of letter writing format for formal letter is given below:

A sample format for informal letter writing is given below:

Let’s check some letter writing tips. It will help you to draft a letter accordingly: